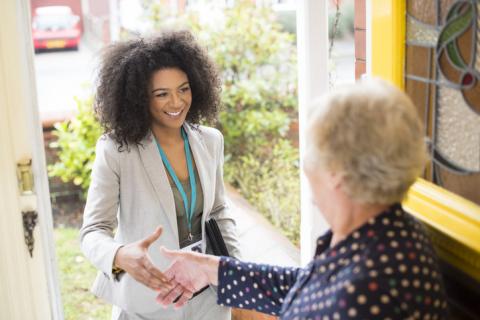 Here are some of the characteristics:

Seniors might encounter elderspeak at the doctor’s office, from restaurant servers, from volunteers, and even from some professionals at skilled nursing facilities and assisted living communities. Perhaps you’ve used elderspeak yourself, thinking it was a caring way to talk to an elder.

People who speak in this manner most likely are well-meaning. We have an instinct to show kindness to and protect people whom we judge to be vulnerable. But in reality, elderspeak is demeaning and patronizing—certainly when used with seniors who are not in need of our protection or assistance, and just as much with those who might have physical or cognitive challenges. They have not lost their need for respect. Studies show seniors can actually suffer emotional harm when addressed as if they were a child.

This is because beneath the sweet surface, elderspeak is controlling and contains some not-so-nice underlying judgments. Singsong baby talk implies that a person is childish. Calling a senior “young man” or “young lady” contains an implication that the person should be flattered to be considered “young,” rather than the less-desirable “old.” Calling a senior “cute” or “adorable” when they’re doing something the speaker considers to be in the domain of younger people also is infantilizing. Consider that small children taunt each other with baby talk, which usually infuriates the other child because baby talk is an expression of the speaker’s perceived superior power.

Gerontologists tell us that seniors who are subjected to elderspeak often internalize the negative messages and begin to doubt their own competence. A diet of elderspeak can wound their self-esteem and send them down a spiral into illness and even early death. Instead of elderspeak, talk to seniors as equals, fully included in the conversation.

Studies also show that senior patients spoken to in this manner are less likely to follow a healthcare provider’s orders, especially seniors with dementia, who are also more likely to encounter elderspeak. Is it comforting? Quite the opposite! According to University of Kansas School of Nursing professor Kristine Williams, RN, PhD, when senior care staff use elderspeak, residents are more likely to be resistive to care, whereas they are more cooperative when spoken to as adults and equals.

It’s true that communication may need to change if a person has challenges such as hearing loss or Alzheimer’s disease. You might need to adjust your speech as needed—for example, speaking more slowly, facing the person, and repeating or rephrasing if necessary. But don’t assume the person needs you to adjust your speech; wait to see if they really need help. And remember: the helpful changes don’t include baby talk. Speak to seniors with the same respect you would want to receive.

Source: IlluminAge AgeWise
Back to Blog