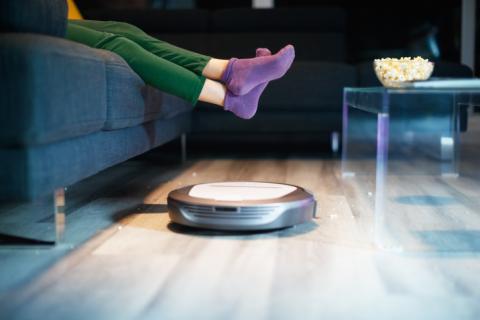 What Comes After the Roomba?

It has been 16 years since the Roomba robot vacuum cleaner was introduced by iRobot.

Partly inspired by a novel robotics approach known as “fast, cheap and out-of-control,” the humble Roomba was not much of a robot. It simply wandered around a room sucking up dust and debris. A second generation was able to autonomously make its way back to a recharging station.

But unlike robots like Sony’s dog, Aibo, it did something useful at a nonastronomical price. It was a hit for iRobot, a spinoff from the Massachusetts Institute of Technology.

Since then, there have been waves of failed attempts to create more sophisticated home robotic products from companies in the United States, Japan, South Korea and Europe. There have been efforts to build humanoid robots, social companion robots, robots that cook, robots that do your dry cleaning, robots that fold your clothes and robots that change the kitty litter.

But there still isn’t a second successful home robot category beyond the lowly vacuum cleaner.

Despite persistent optimism, roboticists and A.I. researchers have painfully learned that while computers can run mathematical circles around humans, things that humans do without thinking are the most difficult for machines. John McCarthy, an A.I. pioneer, would reach into his pocket and deftly extract a quarter as an example of the most challenging tasks for a robot.

Many researchers have come to believe that the recent breakthroughs in machine learning will not be enough to build robots adept at moving and performing tasks in a home. That is likely to require several more technological breakthroughs.

The continuing challenges in building a successful home robot have been underscored recently by the disappointments of several high-profile start-ups.

Mayfield Robotics, which was developing Kuri, a home companion robot with backing from Robert Bosch G.m.b.H., a German electronics company, announced in July that it was “pausing” operations and returning pre-order deposits. Kuri’s demise followed a similar fate earlier this year that befell Jibo, a heavily funded effort by Cynthia Breazeal, an M.I.T. professor, to build a social robot that had started a $3.5 million Indiegogo campaign in 2014.

Pepper, introduced as a home robot by the French robot design firm Aldebaran Robotics and then acquired by SoftBank, a Japanese conglomerate, was initially priced at $2,000 with an additional monthly subscription. The robot is now being advertised on the firm’s website as a commercial “host” or greeter for a flat fee of $25,000.

The snail’s pace of development in home robots stands in striking contrast to the rapid advance of artificial intelligence in successful products like Amazon’s Echo or even the Siri technology of iPhones.

“Not a single human has been replaced by a humanoid robot,” said Sebastian Thrun, the roboticist who started Google’s self-driving car program.

Japan and South Korea have been ahead of the United States in their enthusiasm for home robots, but companies there have had similarly disappointing results.

“At one point I remember the president of South Korea saying that there would be robots in most Korea homes by 2012,” said Tandy Trower, a software engineer who oversaw the original Microsoft Windows operating system and later established a robotics development effort at the company.

He now leads his own home robot company, Hoaloha Robotics, which is focused on a mobile robot to permit older people to live independently at home. Mr. Trower said that while he remained optimistic that in the long run he would be able to develop a robot that acted as a partner or an assistant for aging people, he realized that a commercial product was not on the near horizon.

Despite those repeated failures, many technologists remain optimistic that the home robot is just around the corner.

At Stanford University, which pioneered the original robot arm and first mobile robot in the 1960s, the roboticist Kenneth Salisbury developed the prototype PR1 home robot a decade ago.

The PR1 inspired Willow Garage, a start-up funded by Scott Hassan, one of Google’s original programmers. Willow Garage produced another prototype home robot, the PR2, which led to a number of spinoffs, but no successful commercial home applications emerged from the research.

Both the PR1 and PR2 were early explorations in performing common household tasks like getting a cup of coffee, loading and unloading the dishwasher, and going to the refrigerator and getting a beer. The robot prototypes performed these tasks, but only in highly controlled experiments.

Now, Stanford roboticists are working on a next-generation robot that could potentially work in the home. Silvio Savarese, a Stanford computer scientist, is leading a team developing a robot called JackRabbot, intended for home or campus delivery as well as some tasks in the home. But getting around a house is still difficult, even in a ranch house without stairs, he said.

Self-driving cars’ engineers use the technology “simultaneous localization and mapping,” or SLAM, to navigate. It makes it possible to create a map in an unknown environment and place the car accurately. But in a home, with densely packed objects, including humans, that move frequently, SLAM is insufficient, Mr. Savarese said.

In partnership with a group of University of California at Berkeley researchers led by Jitendra Malik, the Stanford roboticists have developed a new navigation simulator that has similarities to approaches that have led to advances in speech and vision. The system, known as Gibson Environment, compiles 3-D maps of thousands of real-world environments to make it possible for robots to learn to perceive general rules about navigating.

So could a robot that helps tidy up the house be close?

“Picking things off the floor is with in reach if we can get the price of the arm down,” said Ken Goldberg, a roboticist at Berkeley. His favorite for a new market might be what he calls a “decluttering robot,” which would wander the house picking up after its occupants.

“Doing anything time critical is difficult,” he acknowledged. “ But if you are willing to leave the house and come back six hours later — the house is clean.”

His group is also experimenting with a robot that can make a bed — admittedly slowly, but he argues that it is not a task that has to be done at human speed.

The Berkeley researchers are doing their experiments using a robot supplied by the Toyota Research Institute. The automaker is one of at least three large technology companies that have active home robot development projects in Silicon Valley.

Many roboticists say they believe that the aging of people around the globe will be the catalyst for the arrival of more sophisticated home robots.

“The demographic shifts of aging society will provide, in our view, a strong opportunity for a market for such a product to start, and that we also expect that what is good for aging society will also end up being helpful for everyone,” said Gill Pratt, the chief executive of the Toyota Research Institute.

In addition to Toyota, Alphabet’s Google X research laboratory and Amazon have active robotics research efforts that are reportedly aimed at home applications.

Despite the new investments in research and development, veteran researchers are conscious that home robots have seemed imminent for decades.

“The problem,” said Kai-Fu Lee, a leading Chinese artificial intelligence researcher who is now a venture investor, “is that low cost plus high expectations plus no patience makes it difficult to make a great product.”

Source: The New York Times
Back to Blog